(Reuters Health) – Timing meals relative to your own body clock, rather than to the time of day, may affect how lean you are, researchers suggest.

Studies have shown that eating later in the day ups your risk of weight gain. However, the impact of a person’s body (biological) clock – independent of the time of day – has not been tested until now, according to Dr. Andrew McHill of Brigham and Women’s Hospital in Boston and colleagues.

The team recruited 110 college students ages 18 to 22 (about 60 percent male) for a 30-day study of sleep times and food intake.

The students completed questionnaires about their sleep habits at the outset of the study, as well as daily electronic sleep-wake and exercise diaries. They also wore motion monitors throughout the study to help track sleep-wake timing.

For one week during the study, participants used a mobile phone app to time-stamp, document and record their food intake during their regular routines.

They were also evaluated for one night at the hospital to see what time their level of the hormone melatonin began to rise – which marks the beginning of a person’s biological night – and to assess their body composition (i.e., muscle mass and fat).

Melatonin onset timing was similar for both lean participants and those with a higher percentage of body fat, according to the American Journal of Clinical Nutrition study, online September 6.

However, those with a higher percentage of body fat – 8.7 percent higher in women and 10.1 percent higher in men – ate most of their calories about an hour closer to the time of melatonin onset than did lean participants.

There was no relationship between body composition and when (clock hour) they ate, how many calories they consumed, what kind of food they had, their exercise or activity level or sleep duration.

“While it’s not possible to know the timing of your melatonin onset without having it measured very precisely in dim lighting, we tend to think that melatonin levels rise about two hours prior to habitual sleep onset,” McHill explained.

What about waking up and eating a snack in the middle of the night?

“This would also be a time when melatonin is high and your body clock is promoting sleep and fasting,” he said, “so we would consider that a time that food consumption could lead to higher body fat if done repeatedly over a long period of time.”

McHill cautioned that the findings don’t show cause and effect. To do that, he said, “randomized controlled trials that include altering the timing of meals of the exact same food content in relation to melatonin timing (e.g., providing meals within four hours of melatonin onset or restricting calories to when melatonin concentrations are low) are needed.”

It’s also important to study groups other than college students, and the team has already begun to track meal timing in older and ill populations.

Dr. Eric Feigl-Ding, a nutritional epidemiologist at Harvard Chan School of Public Health in Boston who was not involved in the study, told Reuters Health he agrees that “the takeaway is that eating earlier before bed may be better” – perhaps as much as 4 to 5 hours earlier.

However, “actual experiments to show direct long-term weight loss and health benefits from consistently eating earlier before bed are needed,” he added by email.

“Be vigilant of your food intake as time to sleep approaches,” Dr. Jocelyn Cheng, a neurologist at NYU Langone Health in New York City urged in an email to Reuters Health.

“If you notice yourself eating more during this period compared to earlier in the day, consider redistributing your meals, snacks included,” said Cheng, who was not involved in the study. 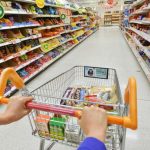 You may see “good for you assurances” on foods that aren’t, well, good for you. Here’s what to look out for.

I love going to the grocery store: I could spend hours walking the aisles, taking in the sights and smells, and checking out new products.

I’ve noticed, however, that my happy trips can take an awkward turn when I run into a fellow mom or one of my patients. They’ll often point to their cart, and silently nod for approval for all the healthy items they are bringing home. In too many carts, I see “good for you assurances” on foods that aren’t, well, good for you.

Here are top five offenders lurking in your grocery store:

All too often, the “made with” label is there to distract you so you fail to see what else is in the product.

Start with “whole grains,” for example. While it’s great that a product is made with whole grains, technically, you could be eating stripped grains with a little whole grain thrown in. Look for a “100 percent” label on your grain products.

2. The ‘only this many calories per serving’ label

When we start worrying about the quantity of calories, we stop caring about the quality. Although eating more calories than you need may contribute to weight gain, calorie amounts are not a testament to nutrient density.

Nuts have a lot of calories, yet they are one of the healthiest foods on earth.

Resist the urge to purchase a processed, artificial food for the lure of how many calories it contains. You’ll most likely be paying for it in the end by overindulging.

3. The ‘all natural’ assurance

Natural has not yet been defined by the U.S. Food and Drug Administration. In fact, the FDA has only accepted the use of the term to mean “nothing artificial or synthetic (including all color additives regardless of source) has been included in, or has been added to, a food that would not normally be expected to be in that food.”

The problem with this limited definition is that it does not contain information related to food processing or use of pesticides. Plus, there are plenty of natural products, like sugar, that don’t contribute to good health.

Until more detailed criteria are developed, don’t expect the “natural” claim to mean your food was just pulled from the ground or a tree.

A 2011 study from Cornell University compared two identical chocolate chip cookies. One was labeled as regular and the other as organic. Study participants showed a preference for the organic option based on taste and nutrient density — they thought the cookie must be lower in fat and calories. They were also willing to pay more for the organic option. Again, the two cookies were 100 percent identical.

This is attributing healthiness to a product, simply based on a label.

Going organic is often a great idea, but if you see the claim used to sell cookies, crackers and candy, don’t assume it’s a better version of its non-organic counterpart.

A lack of high fructose corn syrup does not give a product a free pass. Bragging about a lack of high fructose corn syrup is a case of a manufacturer trying to persuade you that all the other sugars in the product shouldn’t be looked at with as much disdain. The item could still have an excess amount of other sugars, making you less satisfied, and more willing to eat and buy more.

We eat too much sugar to begin with, from all sources — about 130 pounds of it per year. That’s almost 60,000 grams of the sweet stuff.

Here’s the secret to eating healthy:

Eat real food. Don’t rely on the front of the package. Instead, focus on the ingredient list to assess the quality of the product. The healthiest foods on the planet need no marketing at all.

Kristin Kirkpatrick, MS, R.D., is the manager of wellness nutrition services at the Cleveland Clinic Wellness Institute in Cleveland, Ohio, and the author of “Skinny Liver.” Follow her on Twitter @KristinKirkpat. For more diet and fitness advice, sign up for our One Small Thing newsletter. 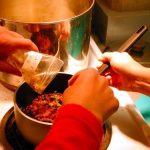 he best culinary paths to better health are not always paved with cash, new research shows, and cooking at home can provide the best bang-for-the-buck nutritionally as well as financially.

A study by Arpita Tiwari, a health systems researcher at Oregon State University, and collaborators at the University of Washington confirms what many mothers and grandmothers have said for decades: that habitually eating dinner at home means a better diet and lower food expenditures compared with regularly dining out.

“Traditionally better socioeconomic status — more money — means healthier people,” Tiwari said. “That’s the trend. This research goes against that; it shows a resilience to that trend. It’s not spending more but how you spend that’s important. What you eat is important.”

“Cooking at home reduces that expenditure, and our research empirically quantifies that when we regularly eat dinner at home, our nutrition intake is better.”

Tiwari is quick to point out, though, that researchers understand the barriers to home-cooked meals.

“A mother who has two jobs and four children, even if she knows the value of home-cooked dinners, doesn’t have time to cook,” Tiwari said. “Government policy needs to be mindful of things like that when states create programs to help Medicaid populations achieve nutritional goals. Right now our system really does not allow for it. What can the government do about that? That’s what needs to be explored in the near future.”

The research involved more than 400 Seattle-area adults who were surveyed regarding a week’s worth of cooking and eating behaviors. Participants also provided various types of sociodemographic information, and their weekly food intake was graded using the Healthy Eating Index (HEI).

HEI scores range from 0 to 100, with higher scores indicating better diet quality. An index score over 81 indicates a “good” diet; 51 to 80 means “needs improvement”; and 50 or less is “poor.”

“Higher HEI scores are generally associated with higher socioeconomic status, education and income,” Tiwari said. “By contrast, cooking dinner at home depends more on the number of children at home. The study showed no association between income or education and eating at home or eating out.”

The findings also suggested that regularly eating home-cooked dinners, associated with diets lower in calories, sugar and fat, meant meeting more of the guidelines for a healthy diet as determined by the Department of Agriculture.

Eighty percent of U.S. residents fail to meet at least some of the federal dietary guidelines, the study notes, and about half the money spent on eating in the U.S. is on food not cooked at home. From the 1970s to the late 1990s, the percentage of home-cooked calories consumed fell from 82 to 68.

“HMOs should have ancillary programs to really encourage people to eat healthier,” Tiwari said. “It’s a benefit for insurance companies to get involved; eating is really the source of most of the issues that the insurance system has to deal with down the road.”

The National Institutes of Health supported this research. Findings were published in the American Journal of Preventive Medicine.

Materials provided by Oregon State University. Note: Content may be edited for style and length.