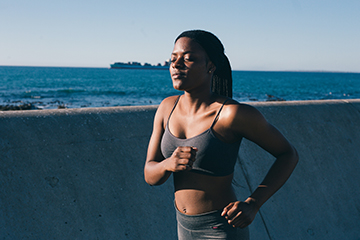 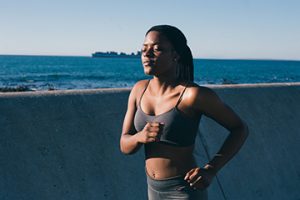 Just like any intense exercise, running relieves stress. What causes that is the fight or flight response that kept early man alive. Not only does running reduce stress, it actually helps you feel happier and more content. It’s all about hormonal changes in the body. Early man had many dangers we don’t have. When was the last time you faced a dire wolf (yes, they aren’t just mythical animals in the Game of Thrones), Columbian mammoth or cave hyena? Unfriendly tribes were another problem. They had to decide whether to stay and fight or run like the wind. That mechanism in the body that helped get the best results in those situations was the fight or flight response.

Today, the fight or fight response kicks in at odd moments.

When you’re under stress, the fight or flight response can automatically get into play. It might be in a traffic jam, at your desk facing an angry boss or when listening to the chronic cry of a baby. It’s not helpful in any of those scenarios. It makes things worse in most cases. The response sends stress hormones surging through your body that causes changes to aid you in fighting or escaping. It slows blood to the digestive system and increases it to the limbs. It increases heart rate and blood pressure, blunts pain, dilates pupils, puts you on edge, fogs your brain, makes you tremble and sometimes causes you to lose control of your bladder or bowels. Those things won’t help you with an angry boss.

Running can reverse all the changes.

When you run, you’re actually doing what the response was meant to do. It burns off the hormones that made you feel stressed. It also does one more thing. It causes the production of hormones that act like natural opioids, so you won’t feel pain. That’s called the “runner’s high.” It also helps clear up that foggy mental state that stress can cause by increasing circulation of the blood to the brain.

Running and other types of exercise are now being used as adjunct therapy for depression.

Both depression and anxiety are now successfully being treated with an adjunct therapy of running. The basic theory is that stress causes both depression and anxiety, so relieving the stress by running or doing other forms of exercise can bring relief. While it’s just being used as an adjunct therapy, some studies show it works as well as drugs used to relieve those problems. Running burns off the hormones of stress and replaces them with ones that make you feel good.